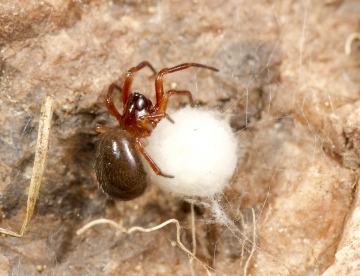 Distribution
A species restricted to Snowdonia, the Lake District, the Scottish Highlands, Dumfrieshire, Kirkcudbrightshire and Selkirkshire. This is a Holarctic spider with a circumpolar Distribution: (Platnick 1997; Goodier 1967). It is known from the mountains of Ireland, Scandinavia and Poland, but has not been recorded from the Alps.

Habitat and ecology
In Britain H. frigida is typically found beneath felsenmeer rocks on the summits of high mountains. In the far north, the species occurs at lower altitudes. In felsenmeers it favours the interface between rocks and heath rushes. It frequents drier habitats than its British congeners. Mature specimens of both sexes have been recorded between April and September, but it is probably mature throughout the year (winter recording being rare in the mountains). On Snowdon, females have been found guarding egg-sacs suspended within their webs in May.

Status
Local, but may be common in its mountain refugia.

Management and conservation
Ensure that further damage to mountain vegetation due to excessive recreational pressure is prevented.

Adult Season Data (based on 233 records with adult season information)

Recorded substrate and hydrology for locations with Oreoneta frigida