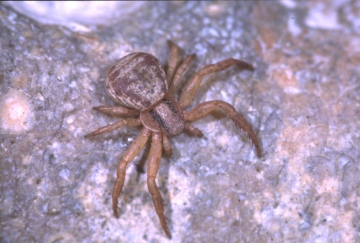 Distribution
The species has a widespread but patchy and scattered Distribution: across most of Britain. It is widespread in western and central Europe.

Habitat and ecology
O. atomaria lives within the litter layer of grasslands and heathlands, ambushing soft bodied prey. The spider seems to prefer more mature heathland (Merrett 1976) or limestone grassland (Bell 1999) rather than more disturbed sites. In the north many records are associated with stony habitats, where the spider occurs under stones (J. Newton, pers. comm.). Both sexes may be more nocturnal than diurnal and active even under snow (Aitchison 1980). Egg-sacs are attached to the ground and are guarded by the female who sits over them (Bristowe 1958). Adults have been recorded in every month of the year with two peaks in the male activity, the first in spring (April-May) and the second in late summer (August-September) (Merrett 1967; Bell 1999). Our data show males recorded most of the year, but mainly between March and May and in September and October.

Adult Season Data (based on 609 records with adult season information)

Recorded substrate and hydrology for locations with Ozyptila atomaria