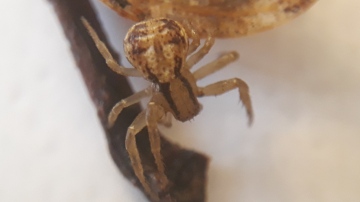 Distribution
The species is widespread, but scattered in much of Britain. It is widespread in north-western and central Europe.

Habitat and ecology
O. trux has a wide habitat niche, occurring in all types of wet and dry grassland, heath and woodland, from sea level to 350 m in Kirkcudbrightshire (J. Newton, pers. comm.). Although Merrett (1967) recorded adults from May to September, there is some suggestion that this spider may be similar in phenology to O. atomaria with adults throughout the year (Roberts 1995). The spider may spend much of the season inactive or within the upper zone of the vegetation thus avoiding capture. Our data show adults have been recorded throughout the year, with males from February to November, but mainly in May, June and July.

Status
Local, but more common in the north and west.

Adult Season Data (based on 1406 records with adult season information)

Recorded substrate and hydrology for locations with Ozyptila trux