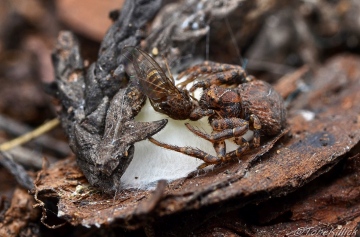 Distribution
The species is widespread in the southern half of Britain as far north as Northumberland, but with few records in the west. It is widespread in north-western and central Europe

Habitat and ecology
A species that occurs in the litter zone in a variety of habitats including woodland, grassland, parks and gardens and even disturbed areas such as quarries. In highly structured habitats the spider is able to climb to the lower branches of trees and may also be found under bark. Crocker & Daws (1996) found adults between April to November with a peak in male and female activity in June. Our data show adults recorded throughout the year, but with one peak building from April and June and a smaller peak building from July to September.

Adult Season Data (based on 587 records with adult season information)