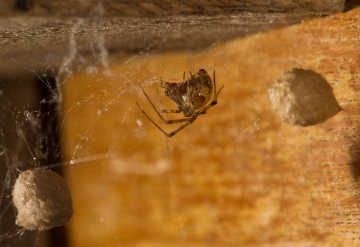 Distribution
The spider is widespread in England but with few records in Wales and north of Yorkshire. A number of records from outdoor habitats included here probably refer to A. simulans prior to its separation as a distinct species or as misidentifications. It is widespread in western and central Europe.

Habitat and ecology
Although typically found in buildings such as heated greenhouses, this species has occasionally been found outdoors, e.g. on yew trees in churchyards. Mature specimens of both sexes can be found throughout the year.

Status
An introduced synanthropic species. Roberts (1995) suggests that pesticides are responsible for a decline in the species, but the increase in large garden centres may be reversing this trend (I. Dawson, pers. comm.).

Adult Season Data (based on 164 records with adult season information)

Recorded substrate and hydrology for locations with Parasteatoda tepidariorum