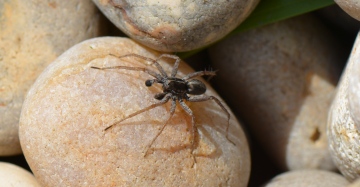 Habitat and ecology
Pardosa agricola is found on shingle and sand on the coast and beside rivers and lakes, and occasionally on stony waste ground away from water. It seems to require bare substrate with little or no vegetation, though there is some evidence that adult females move to more vegetated areas after the first spiderlings have hatched (Albert and Albert 1976). It is a variable species, placed by D J Clark (in Locket et al. 1974) into three forms:
(1) a pale form on shingle by fast-flowing rivers away from the coast, agricola.
(2) a dark form, slightly variable, on shingle of coastal beaches in the south and in Ireland, arenicola O. P.-Cambridge.
(3) a darkish colour form, highly variable, on coastal shingle beaches in the north, maritima Hull.
Both the genitalia and the patterning of the carapace and legs show considerable independent variation, not easily correlated with habitat or distribution (Roberts 1985). The adults appear in early May. Most males die off in June but some survive into late July. Females with eggs survive into August, occasionally September.

Status
Locally frequent in northern England and Scotland, less common in Wales and Ireland, and very scarce in southern England. The Nationally Scarce (Notable B) P. arenicola has been deleted from the British check-list, as it is now regarded as synonymous with P. agricola (Merrett & Murphy 2000).

Adult Season Data (based on 405 records with adult season information)

Recorded substrate and hydrology for locations with Pardosa agricola