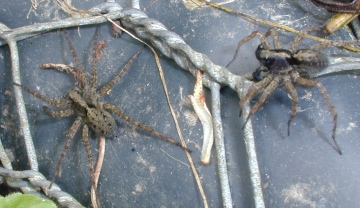 Habitat and ecology
The spider occurs in a wide range of open habitats, especially in damp situations. It has been recorded from grasslands, marshes, riversides, fens, saltmarsh, woodland clearings, hedge banks, moorland, blanket bog, waste ground, field margins and rarely heathland. In gardens this is usually the commonest Pardosa species. Adults of both sexes are found mainly in early to mid-summer, and sometimes again in early autumn.

Adult Season Data (based on 3687 records with adult season information)