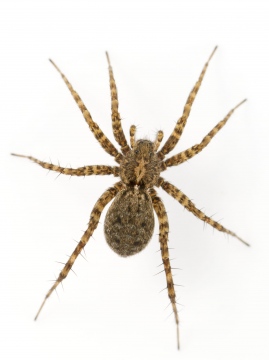 Distribution
The species is widespread but locally distributed in southern Britain, with few records from Scotland. It is widespread in western and central Europe, but not recorded from Scandinavia or Ireland.

Habitat and ecology
P. hortensis occurs in open situations running over sparsely vegetated ground in grasslands, heathland, waste ground, woodland clearings, old chalk and sand pits and the sea shore. It is very erratic in occurrence on heathland. Adults of both sexes are found mainly in spring and early summer, with females persisting later.

Status
The spider is very local, but may be frequent in suitable habitat.

Threats
The loss of sites to development and the loss of open habitats to seral succession are probably the most important threats.

Management and conservation
Small scale rotational disturbance is likely to benefit this species by providing a continuity of areas of sparsely vegetated ground.

Adult Season Data (based on 503 records with adult season information)

Recorded substrate and hydrology for locations with Pardosa hortensis