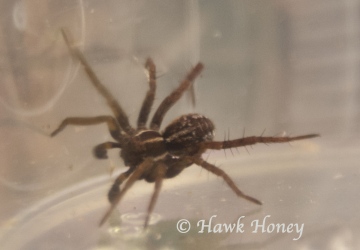 Distribution
The species is widespread but locally distributed as far north as central Scotland. It is widespread in western and central Europe.

Habitat and ecology
Pardosa monticola usually occurs in open short vegetation in grasslands, meadows, open heaths and dunes, especially where the habitat is old and unimproved. It may be abundant on chalk grassland and stabilised dunes. In Wiltshire, it is almost exclusively found on the short turf of chalk downland (Askins 1997). Adults occur mainly from early to mid-summer, females later.

Status
The spider is usually numerous where present, but local or rare in much of the modern agricultural countryside. Crocker & Daws (1996), Wright (1997) and Harvey (1997) note its rarity in Leicestershire (a single site), Warwickshire (two sites) and Essex (a few localities) respectively.

Adult Season Data (based on 1636 records with adult season information)

Recorded substrate and hydrology for locations with Pardosa monticola