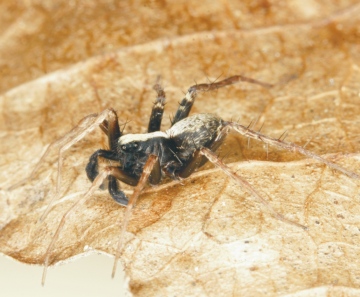 Distribution
The species is widespread, but becomes more scattered in northern Britain. It seems to be restricted to the more western parts of Europe (TÃ¶pfer-Hofmann, Cordes & Helversen 2000).

Habitat and ecology
Pardosa saltans occurs in forests, woodlands and copses and sometimes nearby grassland and hedgerows. It seems to be largely restricted to old and ancient woodland sites, where it may be numerous running over the ground in open clearings as well as amongst litter within the shade of the wood. Adults mainly occur in early to mid-summer, with females later, occasionally even until October.

Status
The spider may be localised, but is usually found in numbers. P. saltans was described by TÃ¶pfer-Hofmann as a species distinct from P. lugubris and so far nearly all British material examined has proved to be P. saltans. All old records have been mapped as P. saltans.

Adult Season Data (based on 1910 records with adult season information)

Recorded substrate and hydrology for locations with Pardosa saltans