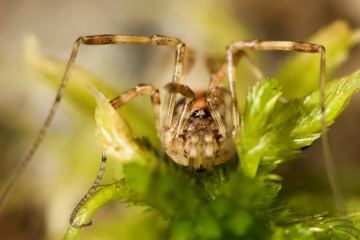 Distribution
Paroligolophus agrestis was first described by Meade (1855) from British material. It occurs throughout the British Isles and is very common, extending north to the Hebrides and Orkney, but not Shetland.

Habitat and ecology
Hillyard (2005) considered this to be the most common and abundant species of harvestman in the British Isles, although in the HRS records it now ranks 2nd behind Mitopus morio. It occurs in a wide range of habitats from coastal dunes, grassland, woodland, hedgerow, parkland and heathland up to an altitude of 460m. It has been found up to 1300m in the Cantabrian Mountains in Spain (Martens 1978).

Throughout its adult phase, this short-legged species is able to utilise not only the ground layer vegetation but also the tree canopy. Like the other short-legged dendrophile, O. hanseni, it leads a bit of a 'snakes & ladders' life, regularly falling off or being blown out of the higher layers and climbing back up.

Adult males are present from late June early July and eggs are laid in late summer and through the autumn, hatching during the spring. The adults are often seen taking a Christmas holiday walk (even on snow) and can persist through to March. Hillyard (2005) notes that juveniles can persist until September. Curtis (1978) lists adult P. agrestis as being present in all months of the year but with most activity in June and October/November.

Acosta & Machado (in Pinto-da-Rocha et al. 2007) list a wide range of items which P. agrestis has been recorded as eating, including: springtails, aphids, fly and lepidopteran larvae, ants, woodlice, snails and bird droppings.

Curtis, D. J. 1978. Community parameters of the ground layer araneid-opilionid taxocene of a Scottish island. Symposium of the. Zoological Society of London 42: 149-159.

Adult Season Data (based on 1521 records with adult season information)

Recorded substrate and hydrology for locations with Paroligolophus agrestis