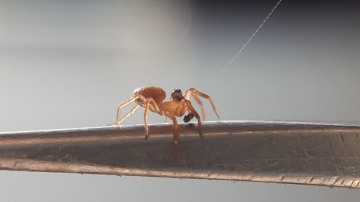 Habitat and ecology
This species is usually found on unimproved grassland and mature heathland. It can be found on tall grass, heather and gorse, but may also occur abundantly in sparsely vegetated sandy habitats. In West Lancashire it is most frequent at middle altitudes (100 - 250 m) but has been found at 400 m (J. Newton, pers. comm.). P. ludicrum builds a small sheet-web amongst vegetation, normally close to the ground. Adult males are active between April and July with a defined peak in May (Merrett 1969), but maybe later further north. Our data show a peak in recorded adults between April and July, females later than males.

Adult Season Data (based on 1429 records with adult season information)