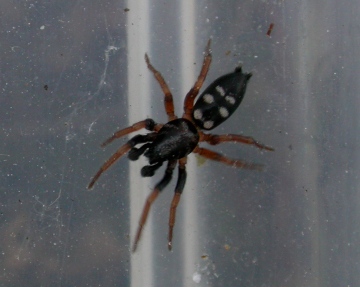 Distribution
The species is confined to southern England. It is widespread in western and central Europe as far north as Sweden, but local.

Habitat and ecology
P. braccatus occurs mainly on calcareous grassland, especially near the coast, usually in sparsely vegetated areas or under stones. It is also occasionally found on sparsely vegetated dry heathland in the New Forest, or coastal shingle in Suffolk, and in woods. Adults have been recorded from June to September.

Status
The spider is very local although it may be frequent at some sites on calcareous grassland. It is recorded from a total of ten locations in eight hectads since 1992. Although southern heathland has been poorly recorded in recent times, this is an unmistakable species which is unlikely to be overlooked, and records indicate a major decline since the 1950s. Area of occupancy has declined by 47% from 15 hectads before 1992 to eight hectads since then.

Threats
The loss of calcareous grassland to agriculture, and reduction of grazing.

Management and conservation
Maintain open, stony and sparsely vegetated areas on calcareous grassland by grazing. Some of these areas probably remain open and stony anyway because of lack of soil.