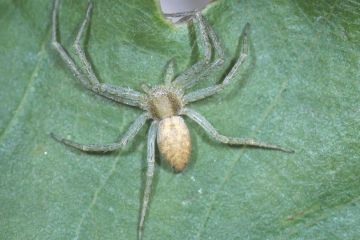 Distribution
The species is confined to the southern half of England. It is widespread in western and central Europe, but has not been recorded from Scandinavia or Ireland.

Habitat and ecology
The spider is usually found in broad-leaved or mixed woodland on the lower branches of broad-leaved trees such as oak at the edge of clearings or rides. It is also found in old hedgerows and green lanes. Adults of both sexes have been found from May to July with a peak in June.

Status
Most references in literature suggest that the species is never very numerous (Merrett 1990) or that only single individuals are usually found (e.g. Crocker & Daws 1996), but this has not been the case in Essex where it has been a widespread and often frequent spider since at least the early 1980s. The species has now seemingly been increasing in frequency and turning up in new locations in other parts of England in recent years. The spider is not uncommon on old trees at some sites in southern Oxfordshire (J. Denton pers. comm.) and it has been found in numbers in Huntingdonshire (I. Dawson, pers. comm.). The species formerly known as P. rufus was split into P. rufus and P. albidus (Dondale 1972; Segers 1989) for information on P.rufus sens. str. see that species account.

Adult Season Data (based on 1022 records with adult season information)

Recorded substrate and hydrology for locations with Philodromus albidus