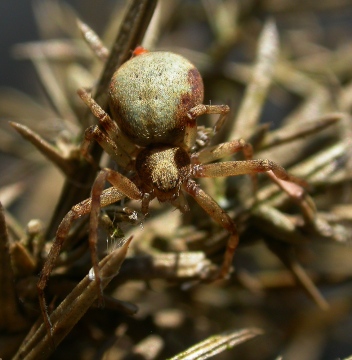 Distribution
The species is widespread in much of the southern half of Britain in lowland areas, but records are scattered in the north. It is widespread in north-western and central Europe.

Habitat and ecology
The species is found in heathland and heathery bogs, hedgerows, scrub and wooded habitats. It is more often associated with scrub and herbage than P. aureolus but is sometimes found on trees and also occasionally enters houses. A very distinct variety occurs where the dorsal abdominal cardiac mark and chevrons are replaced by a pale yellow dorsum. Adults of both sexes are found mainly in early to mid-summer, females occasionally persisting into the autumn, although one male has been recorded in October (Croker & Daws 1996) on ivy on the rear wall of a house.

Status
Common. Taxonomic confusion besets this group and the species was formerly considered as a variety of aureolus (var. cespiticolis) in Locket and Millidge (1951) but recognised as a separate species by Locket et al. (1974) and subsequent publications.

Adult Season Data (based on 2765 records with adult season information)

Recorded substrate and hydrology for locations with Philodromus cespitum