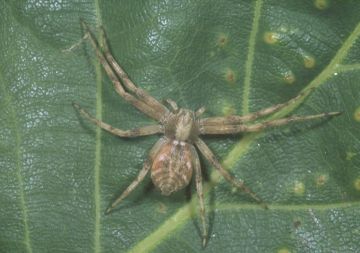 Distribution
The species was first collected in Britain at Box Hill in 1985 but remained unidentified until specimens were determined by Hendrik Segers. The spider has been collected from widely scattered sites across southern England. P. longipalpis has also been found in material collected in France, Spain, Crete, Turkey and Hungary (Segers 1992) and is included in the checklists for the Netherlands, Germany, Switzerland and Romania.

Habitat and ecology
All adults have been beaten from the lower branches of old oak trees in open situations or on their trunks, but juveniles have been taken from heather at Chobham Common in Surrey and from heather under open oak woodland in the Quantocks, South Somerset and kept in captivity until maturity. Most records have been of singletons. Adults have been collected from mid-May to mid-July. P. longipalpis is very significantly larger than other British species in the P. aureolus group and juveniles have a characteristic reddish coloration. Specimens which may be this species should be retained alive and reared until mature. The difficulty of identification presented by this group means that all records should be confirmed with a voucher specimen verified by an arachnologist familiar with this species and the internal structure of the epigyne of females should be examined dorsally.

Status
Although first recorded in the UK only in 1985, current data suggest this is a rare species. There is increasing doubt over whether what we are calling longipalpis is not an entirely different and possibly currently unrecognised taxon.

Threats
Existing evidence points to a low population density and exacting habitat requirements. Most records are from mature oak trees in open woodland habitat, at the edge of clearings or in hedgerows, often stressed by drought, nutrient deficiency or root damage. This type of habitat is threatened by lack of management resulting in the closure of open woodland, or by the loss of old trees. Where old oak trees occur on land converted to arable or old hedgerows are adjacent to arable fields, the spider is also threatened by the use of pesticides on adjacent crops.

Management and conservation
Ensure woodland management includes open clearings or rides and that ancient trees are protected in both woodland and hedgerows.

Adult Season Data (based on 46 records with adult season information)