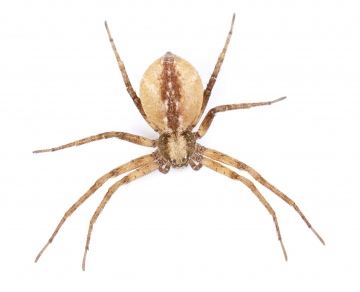 Distribution
The species is restricted to southern and eastern England north to Yorkshire. It is widespread in north-western and central Europe, but has not been recorded from Ireland.

Habitat and ecology
The spider is mainly found on the branches of pine trees, also on yew and Douglas fir. It has been found on broad-leaved trees in mixed woodland and coniferised ancient woodland sites, and is frequent on pine in heathland areas in Norfolk, Suffolk, Surrey and Hampshire. It has also been found by beating yews and other evergreen trees and bushes in urban parks, churchyards and suburban cemeteries in Leicestershire. Adults of both sexes have been found from May to July.

Status
The spider is uncommon but it may be frequent where it occurs.

Management and conservation
When coniferised woods are harvested and reversion to broad-leaved woodland takes place, some mature coniferous trees should be retained at the edge of clearings or rides.

Adult Season Data (based on 246 records with adult season information)