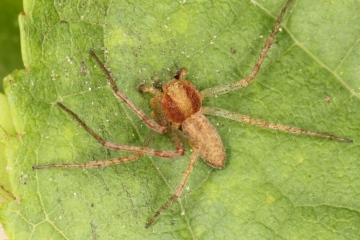 Distribution
The species is confined to southern England. It is widespread in Europe.

Habitat and ecology
In western France P. rufus occurred on young trees and scrub in open habitats, in contrast to the closely related P. albidus which was collected in high oak forest. Adults have been found frrom April to September with both sexes peaking in May.

Status
The species formerly known as P. rufus was split into P. rufus and P. albidus (Dondale 1972; Segers 1989) Dondale (1972) states that Pickard-Cambridge (1895) described and figured a male from Britain that matched the real P. rufus. P. rufus was then not found after the re-description of P. albidus until 2014, after it had been deleted from the British checklist (Merrett & Murphy 2000). Since that date it has been found regularly in the home counties and once in Exeter (Prince 2019). It could be overlooked to some extent because of the difficulty in identification from P.albidus.

Original author of profile: M.Prince (albeit using information from the P.albidus account by P.R. Harvey)  References