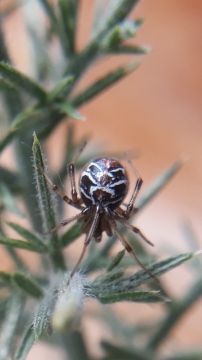 Distribution
Theridion impressum is widespread especially in central southern England, but becomes scattered or absent in parts of the west and north, and is very rare in some parts of the east, including well-recorded counties such as Essex. It has a wide, Holarctic Distribution: (Platnick 1998) and is widespread in western and central Europe.

Habitat and ecology
This species constructs a similar retreat and web to that of T. sisyphium in the same habitats. The two species can sometimes be found together on gorse, heather and thorny bushes. Specimens of T. impressum have also been found on rush florets at the upper reaches of saltmarshes. Adult males have been recorded between May and August, adult females between June and October, and even on one occasion in December. Males peak in June and July, females in July and August, later than T. sisyphium. Mature males have been found mate-guarding immature females in their retreats. Single, spherical blue-green egg-sacs are produced in August and September, slightly later than T. sisyphium, and are kept within the retreat. Emergent spiderlings are fed orally by the female.

Status
The species may be locally frequent.

Adult Season Data (based on 1005 records with adult season information)

Recorded substrate and hydrology for locations with Phylloneta impressa