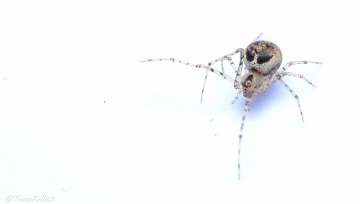 Distribution
The species is widespread in England as far north as Yorkshire, but practically absent from the north and west of Britain. The spider is widespread in western and central Europe including Scandinavia.

Habitat and ecology
T. tinctum is usually found on low vegetation, shrubs, and the lower branches of trees, especially yew. It is often found in the webs of other small spiders where it appears to both steal prey and feed on the resident species. Adults mostly occur in early to mid-summer with females persisting into the autumn, and odd individuals of both sexes being recorded at almost any time of year.

Adult Season Data (based on 1365 records with adult season information)