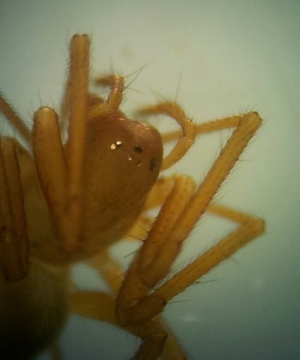 Habitat and ecology
This spider said to be predominately a cavernicolous species, often exploiting the deeper parts of the cave system (e.g. RuÅ¾icka 1996). Outside of the cave habitat, P. egeria has been found down mines, amongst stony debris within moss and occasionally in cellars. However in Britain recorded habitats are varied, with the spider probably occurring in smaller cavities within these. Gradual eye reduction has been observed in this species which is dependent on the distance from the cave entrance (Sanocka (1982), cited in RuÅ¾icka (1996)). Never occurring in any numbers, its ecology and phenology still remain something of a mystery, although it is known to use a web for prey capture and has been recorded in several months between February and September.