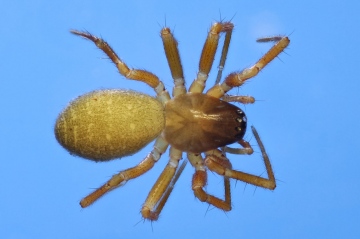 Distribution
The species is widespread but very scattered with most recent records from the Midlands and south-eastern England. It is fairly widespread in north-western and central Europe, but not recorded from Scandinavia north of Denmark.

Habitat and ecology
The biology of this species is poorly known. It possibly occurs mainly on grassland, but it has also been found in woodland, on soft-rock cliffs, heavily rabbit-grazed grassland and arable land. In Essex it has been found on coastal landslips and south-facing grassland with a good proportion of bare ground and in Leicestershire it has been found in gardens, allotments and churchyards in grassland type habitats (J. Daws, pers. comm.). The presence of bare ground may be the most significant common feature. Adults of both sexes have been found between October and June, females also in August and September.

Status
The species is apparently rare and local, with few specimens found. It is possibly under-recorded because its main habitat is unknown.

Threats
Given the apparently broad habitat range of this species, the reasons for its apparent decline are unclear.

Management and conservation
Clearly, further information on this species’ micro-habitat requirements and ecology is needed before detailed management recommendations can be formulated. An interim measure that could help its survival would be to ensure some bare ground is maintained in sites where it occurs.