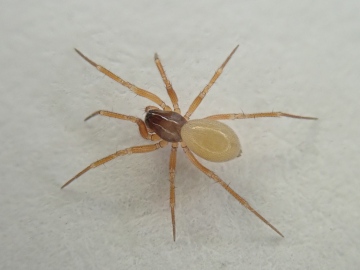 Distribution
The species is widespread in Britain, but records are scattered especially in southern England.

Habitat and ecology
A shade-tolerant species of woodland and upland habitats normally found in small webs close to the ground either under stones or within the moss layer. In central Europe, P. pallidum also occurs in meadows and raised bogs (HÃ¤nggi et al. 1995). Adults can be found throughout the year in Finland (Huhta 1971) a situation reflected in our own data. P. pallidum is rarely recorded in any numbers, although there is some evidence that the peak activity is likely to fall in late summer (Locket & Millidge 1953; Huhta 1971). Our data suggest a more extended or complex adult period between late spring and the autumn.

Adult Season Data (based on 306 records with adult season information)

Recorded substrate and hydrology for locations with Porrhomma pallidum