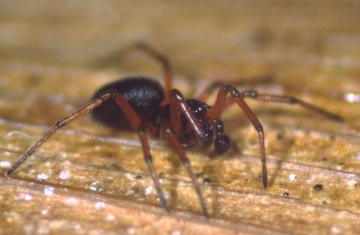 Distribution
The species has been recorded from the east coast, at Havergate Island in East Suffolk and a number of sites along the sides of tidal rivers and tributaries of the Stour, Colne, Crouch and Thames in Essex and West Kent (Harvey 2000b). It has been searched for at numerous places on the coast between Scolt Head, West Norfolk, and Havergate, but without success (Merrett in Bratton (1991)). A European species known from Ireland, the Netherlands, Belgium, Denmark and Germany.

Habitat and ecology
Praestigia duffeyi has typically been found in tidal litter or on mud beneath Halimione, Phragmites and other vegetation in saltmarsh and brackish marshes. P. duffeyi seems to prefer the higher tidal reaches of rivers or their tributaries and the significance of vegetation structure, substrate, tidal factors and salinity on distribution would repay further investigation. Adults of both sexes have been found from April to June, and females also in July.

Status
The spider is extremely abundant in some places, but known from very few sites. Searches at Havergate have failed to refind the spider (M. Shardlow, pers. comm.) although it has been recently recorded from the adjacent Orfordness.

Threats
Most of the known populations are vulnerable and exist in extremely localised habitats which are threatened by development, recreational pressures and rising sea levels. Many of the Thames Marshes have been reclaimed for industrial development, with the extensive use of vertical concrete-capped iron pilings along the waterfront leaving very little saltmarsh (Merrett in Bratton (1991)). With the abandonment of older industrial sites next to the Thames, there is now enormous pressure from initiatives such as the 'Thames Gateway' to redevelop, often for high-value riverside housing. It seems unlikely that the importance of small areas of fragile saltmarsh will be adequately taken into account. Sea levels around Essex are rising relative to the land by some 6 mm a year, a combination of the land sinking and sea level rising as a result of global warming. This is causing erosion of saltmarshes and at the present rate most of the habitat will have been lost within a few decades.