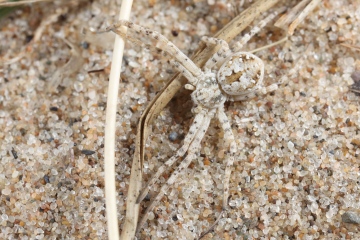 Distribution
The species is widespread on the coasts of England and Wales. It is fairly widespread in western and central Europe as far north as Sweden where it is included in their Red List (GÃ¤rdenfors 2000), but has not been recorded from Ireland.

Habitat and ecology
The spider occurs on coastal sand dunes, especially on fore-dunes, on sand or among marram, where it is camouflaged to match the sand. Males are adult in April and May, females from late April to June. The female deposits her eggs in a cocoon in the sand at the base of marram.

Status
UK Biodiversity Action Plan priority species. The spider is never particularly common and rather local on sand dunes. It appears to have undergone major long-term decline of over 60%.

Threats
Public pressure is a threat at many dune systems, but as it occurs mainly on fore-dunes there may be a lower threat from agriculture or golf-course developments.

Management and conservation
Protect sand dunes from excessive public pressure, especially that associated with use of off-road vehicles.

Recorded substrate and hydrology for locations with Rhysodromus fallax