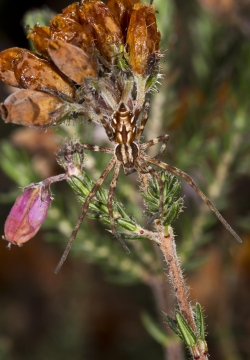 Distribution
Found in Britain as far north as central Scotland. It is widespread in western and central Europe, but has not been recorded from Ireland.

Habitat and ecology
P. histrio usually occurs on heather in heathland, where the female encloses her egg-sac in silk and bits of dried heather. The spider, whose red-brown colour and whitish markings provide excellent camouflage against the background, may be found guarding her egg-sac. There is a most interesting variety found on saltmarsh in Essex (where the heathland form has not been recorded) in which the spider has the reddish-brown replaced by the bluish-green colour of Sea Purslane Atriplex portulacoides. Adults of both sexes occur mainly in May and June.

Status
Generally rare and very local, but the spider may be frequent on some heathlands. It shows a long-term trend of decline and seems to have largely disappeared from northern and western Britain. Trend analysis of the continuing decline in area of occupancy over the period 1976 to 2005 indicates a reduction in population size of 48% over a ten year period.

Threats
The loss of heathland to forestation and development, and possibly loss of saltmarshes as a consequence of rising sea levels.

Management and conservation
Ensure that there is no further loss of heathland to other land uses.