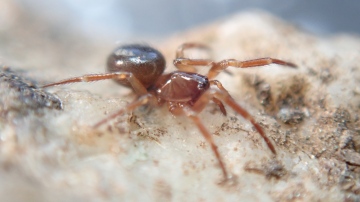 Distribution
The species is locally distributed in Britain with a concentration of records from Wales and coastal sites in Essex and north Kent. It is widespread in western and central Europe.

Habitat and ecology
R. arundineti is usually found at ground level under stones and other detritus and in tussocks, leaf litter and moss in woodland and on heather moorland. In south-east England it has been found in a range of open habitats such as tidal and beach litter, on dunes, grazing marsh grassland, rough grassland and grassland on sand, as well as in set-aside fields (P.R. Harvey, pers. comm.). It also occurs in wetlands in southern England. The majority of adults have been found between late spring and autumn, but mature spiders may be found throughout the year.

Status
Generally an uncommon species throughout the country.

Adult Season Data (based on 550 records with adult season information)

Recorded substrate and hydrology for locations with Robertus arundineti