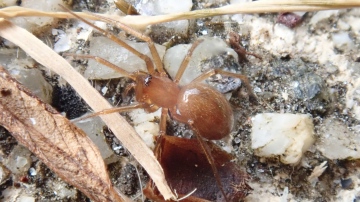 Habitat and ecology
S. abnormis frequents a wide range of habitats including marshland, bogs, disused mines, woodlands (broad-leaved and coniferous), moorlands, heaths and mountains. In these habitats it may be found beneath logs and rocks and amongst leaf litter. Adults of both sexes occur mainly in the summer and autumn, and females are occasionally recorded at other times of year. Spherical egg-sacs are produced between July and September and several egg-sacs may be found suspended within the female's web.

Adult Season Data (based on 1588 records with adult season information)