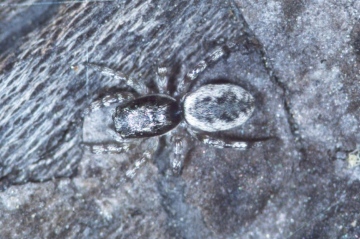 Distribution
Formerly only known from seven sites in Hampshire, Sussex, Surrey and Kent (Merrett 1990), the species is now recorded from a number of new sites in Essex, Berkshire, Hertfordshire (and London) and Worcestershire. It is widespread in western and central Europe, but has not been recorded from Ireland.

Habitat and ecology
Although described as mainly found on the trunks of pine trees (Roberts 1995) many recent records are from old oak trunks at the edge of ancient woodland, in pasture woodland and hedgerows and on old willow trunks. The spider has also been found on an old oak trunk between arable fields in South Essex and on an old oak trunk in parkland converted to arable in Worcestershire (Alexander 1995). It has even been found on a number of occasions on an old lime trunk in a suburban garden at Surbiton, Surrey originally part of an old estate. The spider is very well camouflaged and can rapidly hide in fissures and crevices or under loose bark. The texture and structure of the bark is probably more important than the particular type of tree and all old trunks with fissured bark are worth investigation. The spider is most easily seen when it moves around on the surface of bark in sunshine. Adults of both sexes have been found between late April and the third week of July with most records in June.

Status
The spider may be numerous in favourable conditions, but is more often found as singletons or in small numbers. Records in Essex indicate that the species, whilst rare, may be overlooked and hence more widespread in southern England than present records suggest.

Threats
Most records have been from mature trees in open woodland habitat or at the edge of clearings. Lack of management resulting in the closure of open woodland and the loss of old trees and ancient woodland are almost certainly detrimental to this species. Spray drift from the use of pesticides on crops is likely to affect the survival of this spider, as well as many other invertebrates, where old oak trees occur in land converted to arable or in old hedgerows adjacent to arable fields.

Management and conservation
Open surroundings and the presence of old tree trunks exposed to the sun are likely to be important. Management should retain open surroundings by rotational cutting of woodland ride vegetation, periodic control of scrub and tree invasion and light grazing in woodland pasture. The retention of wide field edges and headlands should be encouraged to help maintain a diverse invertebrate fauna and reduce the effects of spray drift.

Adult Season Data (based on 102 records with adult season information)

Recorded substrate and hydrology for locations with Salticus zebraneus