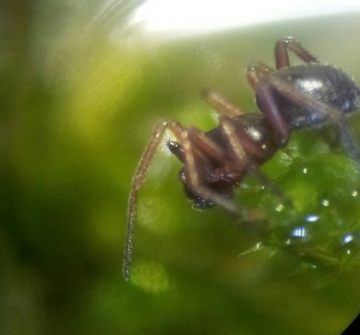 Distribution
The species is widespread throughout Britain. A Palaearctic species widespread in north-western Europe.

Habitat and ecology
S. frontata is found in a variety of situations and habitats such as grassland, leaf litter, moss, bushes and on low vegetation and bushes. As a result of their work at a large number of sites in north-east England, Rushton et al. (1987) concluded that this species favoured more open, highly-managed ley sites. It is a frequent aeronaut which probably explains its capture above 2000' (600 m) on British mountains noted by Bristowe (1939) and Merrett (1971). Adults may be found all year, but results from a number of studies indicate that the main periods of activity are January to March and September to November (Merrett 1969). Our data show peaks in recorded adults of both sexes in spring and early summer, and again in the autumn.

Adult Season Data (based on 2047 records with adult season information)