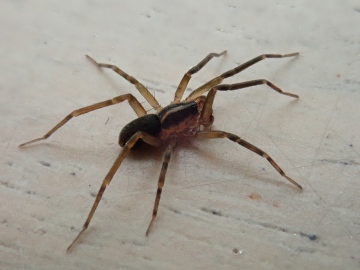 Distribution
The species is widespread in parts of southern England, but very scattered in the west and further north as far as central Scotland. It is widespread in western and central Europe and as far east as Russia, but has not been recorded from Denmark and is on the Red List in Sweden (GÃ¤rdenfors 2000).

Habitat and ecology
The spider occurs in moss and detritus in woodland and also on heathland. In this latter habitat it has been shown that this species prefers more heavily vegetated, damp areas rather than the dry more open vegetation preferred by S. gracilipes (Snazell 1982). Generally it is much scarcer on heathland than S. gracilipes, but commoner in moss mixed with pine litter. Females may be found throughout the year and males in late summer, autumn and January. In a study on Porton Down in Wiltshire the month of peak activity was found to be November (Coleman 1977). Our data show a peak of both sexes in late summer and autumn.

Status
Although it is rather uncommon the spider is found more frequently in the south. It may have been confused with S. palliardii as distinguishing these two species has caused problems in the past (Locket et al. 1974).

Threats
Clearing of ancient woodland and heathland remain potential threats as does drainage of damp areas on heaths.

Adult Season Data (based on 288 records with adult season information)