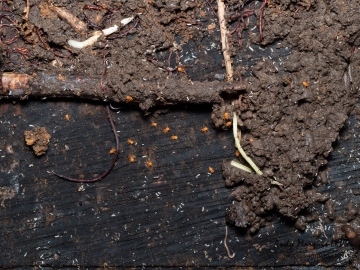 Distribution
This species was first recorded in Britain on 31st December 2017 in a cemetery in Plymouth (Bilton, 2018a). It has since been recorded at one location in Guernsey on three separate occasions in 2020 (January, February and November). For each of these Guernsey sightings, large numbers were recorded each time, with estimates of up to 500 individuals.
This species appears to be native to the northern Mediterranean area. It was first recorded in Italy, and also has been found in Sardinia, Sicily, Corsica and southern France. Beyond this area, it has turned up in Paris and has recently been found in woodlands in north-western France (Iorio & Racine 2017, Bilton 2018b, Martens 1978).

Habitat and ecology
At its Plymouth locality, this species was found on the underside of stones, embedded in the soil but overlying small cavities. Similarly, in Guernsey groups of individuals were recorded by overturning embedded logs and stones in saturated ground. It is considered that it only comes near the soil surface when the relative humidity is high and presumably retreats to lower levels in drier conditions.

Status
Considered to be an introduction (Bilton 2018b). Inconspicuous (small and mite-like) and possibly overlooked elsewhere.

Adult Season Data (based on 3 records with adult season information)

S.doriae on underside of Embedded log
please log on and upload a new image for this species