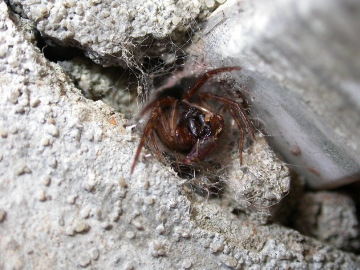 Habitat and ecology
This attractively marked spider lives in a tube constructed in a hole in a wall, under bark and stones or in rubble and scree, from sea-level to high altitudes (over 500 m in Shropshire and West Lancashire). Strong threads which act as trip wires radiate out from the hidden tube. The spider waits in the entrance of the retreat for unwary prey to touch the threads before dashing out to seize and drag the victim back into the retreat for consumption. Sometimes the spider can be enticed out with a tuning fork or a grass stem. Adults occur throughout the year, but both sexes seem to peak in spring and early summer. The eggs are laid within the female's retreat and the young stay there after hatching, sometimes eating their mother before dispersing (Roberts 1995).

Status
Generally common, particularly in the north and west.

Adult Season Data (based on 697 records with adult season information)