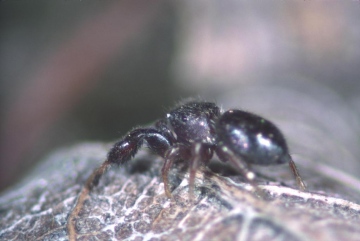 Distribution
Most records are from south-east England, where it is most frequent in the East Thames Corridor. Otherwise the species has a widely scattered and very local distribution, recorded from the Forest of Dean, Gloucestershire, Portland Bill, Dorset, Lancashire, Dunbartonshire, Warwickshire and Hatfield Moors in Yorkshire. It is widespread in western and central Europe as far north as southern Norway, but has not been recorded from Ireland or Sweden.

Habitat and ecology
Sibianor aurocinctus does not appear to be restricted to any particular habitat type apart from a need for dry, sparsely vegetated ground. It occurs in a variety of habitats, but always among short vegetation (heather or grass) or in stony areas. Old sand and chalk quarries, post-industrial sites and unimproved Thames Terrace grasslands all provide suitable habitat in the East Thames Corridor, where the climate is unique in Britain for its low rainfall, high summer temperatures and mild winters. Adults of both sexes have been found from spring to early autumn, but mainly in June.

Status
Recorded from 38 hectads since 1992. Restricting records to those from squares with spider records both before and after 1992, there is a clear increase, from 22 to 35 hectads.

Threats
There is enormous development pressure on all open space in the East Thames Corridor, where the 'Thames Gateway' initiative threatens wildlife habitats and 'brownfield' sites are especially vulnerable. Amenity management, the 'tidying up' of habitats and the landscaping and loss of open areas to tree planting all represent threats to the habitat of this and many other species found in the region. Other threats include the loss of chalk grassland to agriculture at some sites and the loss of sparsely vegetated habitats to succession.

Management and conservation
Open sunny habitats need to be maintained by grazing or the periodic control of scrub and tree invasion. Occasional disturbance to expose areas of bare ground is likely to be beneficial. Global warming may be of benefit to this species in the UK.

Adult Season Data (based on 252 records with adult season information)