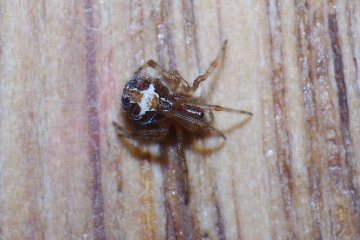 Distribution
The spider is widespread in southern England but very locally distributed elsewhere in Britain with few records from Wales and north of Yorkshire. It is widespread in western and central Europe including Scandinavia, although Aakra & Hauge (2000) show only one record for Norway.

Habitat and ecology
This spider is most commonly seen on heathland where it constructs webs on gorse, heather and other vegetation and occasionally on trees. Both sexes are mature in early to mid-summer, females occasionally persisting later.

Status
The species is commonest in southern England becoming rarer north of the Humber.

Adult Season Data (based on 640 records with adult season information)

Recorded substrate and hydrology for locations with Simitidion simile