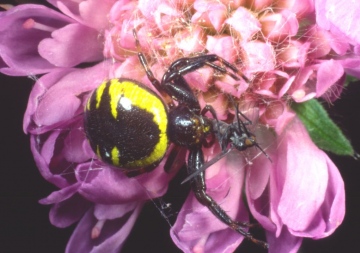 Distribution
The species has been recorded from two sites in Britain with a third location confirmed from North Essex in 2009. The first record was a single female in a garden in Norwich in 2003 which was suspected of being imported. The second was swept from flower-rich grassland in a park in Tunbridge Wells, Kent in 2004. On the continent, this species is widely distributed throughout Europe other than in the Scandinavian countries.

Habitat and ecology
In Europe this species is commonly swept from a wide range of grassland types and may occasionally occur on the foliage of shrubs. The habitat in the park at Tunbridge Wells is quite typical of its habitat type in Europe.

Status
As yet it is not clear whether the specimens captured in Britain represent casual introductions or whether the species is or will become established in this country. Further survey at the park in Tunbridge Wells and similar grassland sites in the area will be required to establish whether a viable population is present.

Threats
Until it is known whether the species is properly established, it is impossible to establish what threats it faces.

Management and conservation
To be established.

Recorded substrate and hydrology for locations with Synema globosum