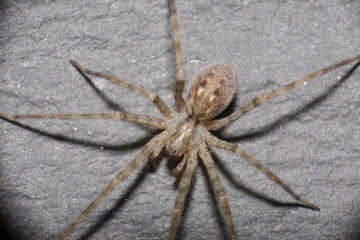 Distribution
The species is widespread within its range in Britain, occupying the southern counties of England, but not those in the south-west. In Europe it is widespread from Portugal to Russia, and from Italy to Scandinavia (Maurer 1992). It also occurs in eastern Ireland.

Habitat and ecology
Roberts (1995) records the habitat as 'sometimes in houses but usually in very old buildings'. It can also occur in abundance on the outside of buildings (e.g. Pershore Abbey, Worcestershire) and has been collected well away from habitation, for example, from an ivy-covered wall in Marlborough, Wiltshire, and a hedge near St Ives, Cambridgeshire (Oxford, pers. obs). These habitats are described in Roberts (1995) as being more typical of the species in southern Europe and may be an indication of a warming climate. Adults of both sexes have mostly been recorded in late summer and autumn. This species shows extreme sexual dimorphism for leg length. For specimens with a similar body size, mature males have legs almost twice as long as those of females (Oxford & Merrett 2000).

Recorded substrate and hydrology for locations with Tegenaria parietina