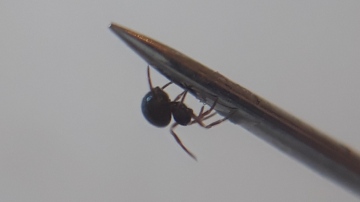 Habitat and ecology
This species is even smaller and more like a linyphiid spider than Pholcomma gibbum. Like that spider, it is usually found at ground level under stones and in moss etc. but may also be swept from taller vegetation. It has been recorded from a variety of habitats including sphagnum bogs, heathland and damp places in woodland. Adults have been recorded in most months of the year, possibly with a peak in April.

Status
Apparently uncommon, but possibly under-recorded due to its small size.

Adult Season Data (based on 570 records with adult season information)