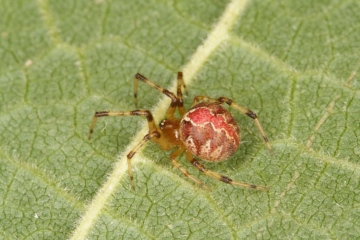 Distribution
The species was first recorded in Britain as a male at Chobham Common, Surrey in 1977 (Murphy & Murphy 1979) with a female taken in the same vicinity in 1984. There have been a number of more recent records (Carr 1998; Carr & Harvey 1996; Harvey et al. 1993; Jones 1992) and further unpublished records in South Essex, West Kent and Surrey which suggest that the spider may be more widespread in southern Britain than previously suspected. The species is widespread in western and central Europe.

Habitat and ecology
The spider has previously been associated with mature heathland in Britain and pine woods on the Continent (Merrett in Bratton (1991)). However, recent evidence suggests that mature broad-leaved trees such as large oak or beech in open situations at the edge of woodland clearings, acid grassland or heathland are more typical. Mature males and gravid females have been beaten off the lower branches of oak at Leyton Flats in South Essex and further males and females have been collected from large oaks in open habitat in South Essex and Hertfordshire, and from mature beech at Burnham Beeches in Buckinghamshire (Harvey et al. 1993; Carr 1998). Large numbers have recently been identified in fogging samples, mainly from from oaks, collected in woodland in Richmond Park during 1983-1984 (Harvey 2009). However, in 1998 an adult female was also collected from scrubby oak in a hedgerow near Dartford Heath in West Kent and an adult male was taken in a pitfall trap set in a silt lagoon at Rainham Marshes in South Essex. Adults have been found in the period from early June to mid-July except for a single female taken in October.

Status
Although now widely recorded within an area in south-eastern England, this is probably due to the recognition of its favoured habitat. Small numbers have usually been found, but many specimens have recently been identified in material collected in 1984 by canopy fogging of mature oaks in Richmond Park.

Threats
Although most recent records involve mature broad-leaved trees, a common feature is an open habitat at the edge of clearings or widely spaced trees in open grassland or heathland. Lack of management resulting in the development of secondary woodland and the closure of open woodland is probably detrimental to this species.

Management and conservation
Retaining open surroundings by light grazing or periodic control of scrub and tree invasion is likely to be important.

Adult Season Data (based on 76 records with adult season information)

Recorded substrate and hydrology for locations with Theridion pinastri