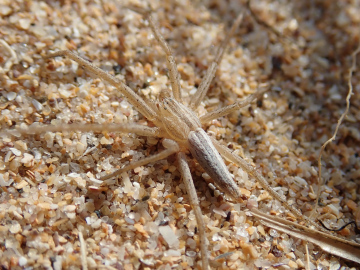 Distribution
The spider has a scattered Distribution: in much of Britain, but is absent from many areas. A Holarctic species, widespread in western and central Europe.

Habitat and ecology
T. maritimus is found on coarse grasses, heather, rushes, etc. in damp places, raised bogs, on sand-hills and rough ground. Specimens are often found hugging plant stems with the legs extended along the length of the stem and in this position they are largely inconspicuous. When disturbed they move very rapidly upwards in the vegetation. Adults of both sexes are found late spring to mid-summer, females persisting later.

Status
Although T. maritimus has a much more localised distribution than T. oblongus, it may be locally abundant. In the past there has been some confusion between these two species and they are only separable with certainty by careful examination of the genitalia.

Recorded substrate and hydrology for locations with Tibellus maritimus