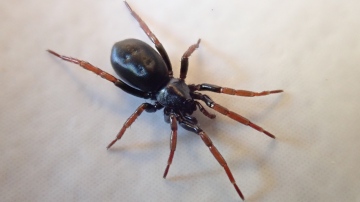 Distribution
The species is confined to southern Britain south of a line from Norfolk to Herefordshire. It is widespread in western and central Europe as far north as Sweden, but has not been recorded from Ireland.

Habitat and ecology
T. pedestris usually occurs in chalk and limestone grassland, often under stones in fairly open areas. In Essex it occurs on dry south-facing grasslands, landslip areas and at the base of sea walls. It has occasionally been found in open sandy areas on Breckland heaths. P. Merrett notes an occurrence in his kitchen sink! (limestone grassland nearby). Egg-sacs are deposited under stones. Adults of both sexes have been recorded between May and August, mainly in June.

Status
The spider is abundant in some places, especially on dry coastal grassland with many loose stones, but less common though widespread inland.

Threats
The loss of calcareous and coastal grassland to agriculture.

Management and conservation
Maintain grassland by grazing. This species is probably less sensitive to changes in grazing pressure than many grassland species, as it occurs in some areas with tall vegetation, and is often in stony areas which tend to remain unvegetated because of lack of soil.

Adult Season Data (based on 592 records with adult season information)