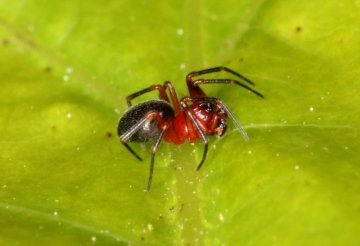 Distribution
The species was formerly confined to a small area in Surrey, Sussex and West Kent between the North and South Downs, but there are more recent records from various other counties. It has not been recorded from Ireland and is only listed for Sweden in Scandinavia, but is otherwise widespread in north-western and central Europe.

Habitat and ecology
T. cristatus occurs on the foliage of various trees and bushes, especially oak, birch and gorse, in a variety of situations such as woodland, heathland, gardens, parkland, etc. Adults of both sexes are found in May and June.

Status
The spider is numerous at some sites, but often very local, and is sometimes found on only one or two trees at a site. Recent records from the West country and West Midlands suggest it might be expanding its range outside the South-East.

Threats
As populations of the species appear to be scattered on trees in a variety of situations, there are probably no serious threats to the species as a whole, although local populations may be lost as a result of development, tree-felling, etc.

Management and conservation
Protect woodland and other sites where the species could be found from loss of trees associated with agricultural, forestry and urban development.

Recorded substrate and hydrology for locations with Trematocephalus cristatus