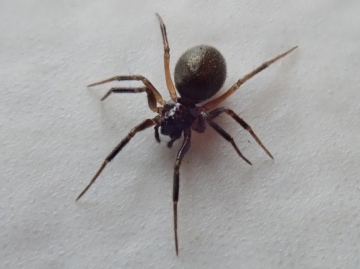 Distribution
The species is restricted to southern England except for a single female taken in 1976 on Ailsa Craig at the southernmost point of the Clyde Estuary, Scotland (Hogg 1995). It is widespread in northern and central Europe, but in Scandinavia only recorded from Sweden.

Habitat and ecology
T. saxicola occurs mainly on fairly tall calcareous grassland, especially near the coast, in grassy areas on heathland and shingle, and on heathland in Cornwall (Lizard Peninsula) and the New Forest. Females have been found from April to July with a peak of both sexes in June.

Status
The spider is fairly widespread on calcareous grassland in the south, but rather local and never particularly common. There has been a significant decline in occupied 10-km squares.

Threats
The loss of calcareous grassland to agriculture.

Management and conservation
This species appears to favour relatively lightly-grazed grassland, but it would be necessary to control growth of scrub.

Adult Season Data (based on 72 records with adult season information)

Recorded substrate and hydrology for locations with Trichoncus saxicola