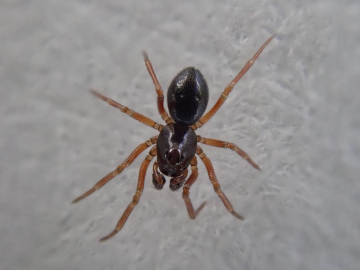 Distribution
The species has a widespread but patchy and very scattered distribution in Britain. It is widespread in north-western and central Europe.

Habitat and ecology
Principally a winter-active species associated with bare or sparsely vegetated calcareous grasslands, heathlands and sandy grasslands. In central Europe by contrast, T. digitatus seems to show a distinct preference for coastal grasslands (Hänggi et al. 1995). T. digitatus builds a small horizontal sheet-web over depressions in the soil or against stones. Adult males have been recorded from October to May, becoming active between the months of January to March (Crocker & Daws 1996), in agreement with our data which show most records of males in those months. Females have been found to persist until July (Bell 1999).

Status
The species may have suffered a long-term decline. Although this may be partly a result of under-recording on southern heathlands, the decline has apparently occurred throughout Britain.

Threats
Much of the recent loss can probably be ascribed to the loss of undisturbed heathland and grassland to agriculture, forestry and housing.

Management and conservation
Protect existing heathland and grassland from conversion to other land use. Ensure heathlands and grasslands are managed to maintain open bare ground habitats.

Adult Season Data (based on 264 records with adult season information)