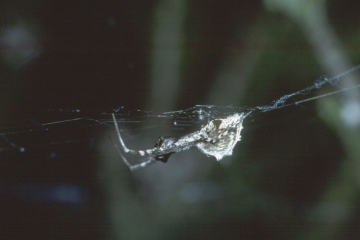 Distribution
The spider has been found at a few heathland localities in southern England - the New Forest and Crookham in Hampshire; Chobham Common, Thursley Common and Ash Ranges, Surrey and Lavington Common and Ambersham Common, West Sussex (Merrett, in Bratton 1991). Denton (1999a) adds other Surrey locations for the spider at Brentmoor Common and Witley Common. It is widespread in western Europe but absent from Scandinavia and Ireland.

Habitat and ecology
The spider favours mature heather plants where it spins a horizontal orb web about half way up the plant. There is a stabilimentum (band of silk) running through the web's hub, extending to its opposing edges. The spider hangs down from the web hub in line with the stabilimentum. Both sexes mature in the late spring.

Status
UK Biodiversity Action Plan species. Large numbers have been found in some localities but the species is no longer present or severely reduced in numbers at some of its former strongholds.

Threats
The prolonged and continued loss of mature heathland has destroyed much of the habitat for this species. The loss of habitat has been due primarily to fire, planting with coniferous woodland, motorcycle scrambling and birch and pine invasion (Merrett, in Bratton 1991). Housing developments have also destroyed much heathland.

Management and conservation
At sites where the species still exists a mature heather habitat should be retained and encouraged. Where heather is perhaps over-mature a programme of controlled annual burning of small areas over a period of 20 years or so (Merrett, in Bratton 1991) and manual scrub clearance should help maintain a mature heather habitat. On some fenced sites the Calluna heath can be effectively managed by grazing, but this option is not possible on sites with common rights where fencing is prohibited.