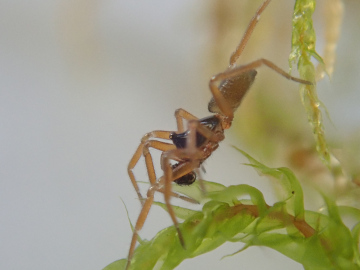 Habitat and ecology
W. nodosa is found in moss in woods and marshes and may be locally frequent in lowland bogs and damp heathland in the south of England. Limited data suggest adults occur in the autumn, winter and spring.

Status
The spider is uncommon throughout Britain and has shown an apparent long-term decline in most areas. Currently, it appears to be most widespread in Wales and Scotland.

Threats
Drainage of lowland bogs and destruction of heathland for agriculture and urban development represent potential threats. However, the species has a wide habitat preference and the reasons for the recent decline are not at all clear.

Management and conservation
Prevent drainage of lowland bogs and further loss of heathland to agriculture and urban development. More needs to be learnt of the ecology of this species before firm management recommendations can be made.

Recorded substrate and hydrology for locations with Walckenaeria nodosa