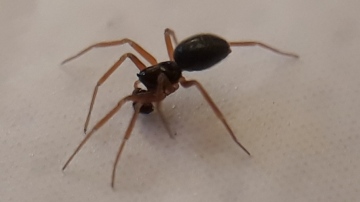 Distribution
The spider is widespread throughout England and Wales, becoming very scattered in northern England and Scotland where it is apparently absent from large areas. A Palaearctic species, widespread in north-western and central Europe.

Habitat and ecology
W. unicornis is found amongst detritus, moss and grass, generally in marshy areas, but may sometimes be swept from taller vegetation and scrub. Adults have been recorded throughout the year, with peaks in the spring and early summer, and again in the autumn.

Status
The species is generally infrequent but may be common locally.

Adult Season Data (based on 1035 records with adult season information)

Recorded substrate and hydrology for locations with Walckenaeria unicornis