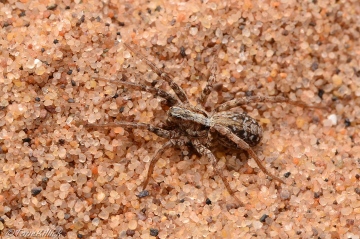 Distribution
X. miniata is widespread on the coast of Britain as far north as eastern central Scotland, but is absent from some apparently suitable areas. It is widespread in western and central Europe, but has not been recorded from Ireland.

Habitat and ecology
This lycosid spider is essentially restricted to coastal sand dunes where it favours fixed dunes. In this habitat specimens can often be found in association with areas of sand adjacent to clumps of restharrow. X. miniata has also been found inhabiting rocky, sparsely vegetated terrain at a coastal Flintshire site (Felton 1995). Adults of both sexes have been recorded in summer. Females have been observed carrying young on their abdomens in July.

Status
Locally common in its dune habitat but has apparently declined in the past 20 years.

Threats
Public pressure on sand dunes has increased significantly in recent years and may pose a threat to this species. The use of off-road vehicles on sand dunes can cause serious erosion and degradation, particularly to dune heath where this species is most common.

Recorded substrate and hydrology for locations with Xerolycosa miniata