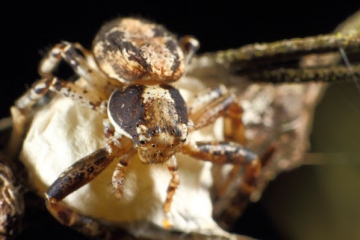 Distribution
The species has a widespread but rather scattered Distribution: in much of southern Britain, with a few scattered records north to Inverness-shire. It is a Palaearctic species widespread in western and central Europe.

Habitat and ecology
X. audax is found on gorse and heather in heathland and sometimes grassland, usually at higher levels in the vegetation than X. cristatus. Adults of both sexes are found mainly in late spring and early summer, females persisting later.

Status
The spider is frequent in suitable habitat in southern England, but very local elsewhere. It has been considered by some authors to be a form of X. cristatus, but there is now agreement that it is a separate species. However careful consideration of colour, carapace markings and genitalia is needed to distinguish the two species.

Adult Season Data (based on 196 records with adult season information)

Recorded substrate and hydrology for locations with Xysticus audax