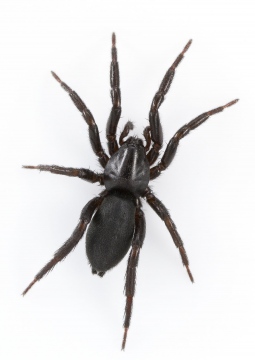 Distribution
The species has a widespread but patchy and mainly western Distribution: in Britain except in the south, with few records north of south-west Scotland. Z. apricorum is very close to Z. subterraneus (the genus type) and there is increasing evidence of introgression between the two species. Typical Z. subterraneus specimens seem to be dominant in north-east Europe whilst Z. apricorum seem to be dominant in south-west Europe. The present records in Britain are more or less consistent with this conjecture. However, the overall situation remains confused due to the fact that many specimens of Z. apricorum and Z. subterraneus in European museums and in private collections have been misidentified.

Habitat and ecology
Like many Zelotes species, Z. apricorum has a preference for stony beds and quarries in both calcareous and acidic areas, but is also found in stony coastal habitats and can sometimes be found when grubbing in grassy tussocks. In common with all Zelotes species, it is agile and has an impressive turn of speed which makes its capture something of a triumph for the collector. The pink coloured egg-sacs are typically attached to the underside of a stone. The shape of the egg-sac reminds one of a small fried egg, 'sunny side up'. Adults have been recorded between March and November, but with peaks for both sexes in June and September.

Adult Season Data (based on 716 records with adult season information)

Recorded substrate and hydrology for locations with Zelotes apricorum